The powers so far below are those that are attributed specifically to Warlocks and Witches. More powers are to come....

"The power to turn/ or Transmute ones form of matter into another" in sort the weilder of the power can transfrom/transfigure/alter matter, energy, elements, objects and beings into anything in which they desire.

A Metamorphagus is a very rare witch or wizard who has the ability to change their appearance at will , without the need of a wand, potion or spell. In Greek, "meta" means "change," "morph" means "shape," and "magus" (in latin) means "magic or wizard."

Atmokinesis, can also be known as weather manipulation, it is one of the most powerful abilities and allows the person to control and manipulate various forms + aspects of the weather. It can either be used to cause massive damage or to do many great things depending of the intentions of the user.

The person with this power is able to create, shape and manipulate energy. The energy can be transformed to a number of other forms. Common energy forms include the kinetic energy that is possessed by a moving object, the radiant energy which is carried by light and there is also electromagnetic radiation, these various types of potential energy are the ones that the user is able to manipulate.

This refers especially to main character Sophia Dimitrov. It is a certain type of witch that is strong and wise , upper level evil witch or demon with the magical ability to predict the future, self teleportation, electrical energy manipulation and being able to resurrect others from the dead (it takes a while for Crones to realize they have this particular power). Although a Crone is typically evil, they are independent and have no alliances, making them somewhat neutral parties. A Crone will usually work for the side of Good or for the Greater Good if there is a self interest. A very strong spell or potion is needed to kill a Crone.

Vitalum Vitalis is the balancing of scales between one life force and another. It involves manipulating one's life force through touch and breathing. It is possible, to perform this power without breathing and by simply transferring your life force through touch. However this often leads to the caster being weaker and depending on how long the target was deceased it could draw out quite a large amount of energy from the caster.

An aura is an energy field that surrounds living objects and objects that hold some kind of Power. Each color in an aura represents different traits and aspects of you. Specifically Aura reading is the art of investigating the human energy field, or the energy fields of other sentient beings.

Telekinesis is the psychic ability to directly influence objects using our mind. Telekinesis can be used to move objects, vibrate objects, but we can also use it to manipulate time, elements, space, and energy.

The ability to control and conjure fire with the power of the mind. 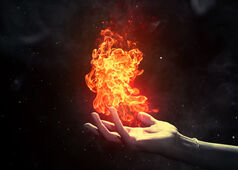 The ability to control water with the power of the mind.

The ability to obtain direct knowledge about an object, person, location or physical event through means other than the user's physical senses. This can be activated by just being around a person, focusing on specific tasks, searching for information, and touching objects.

Spiritual descent into the netherworld or afterlife. Witches are able to project themselves directly into Hell, which takes the form of their worst fears. If a witch is stuck for a certain amount of time, they will never be able to leave and their body disintegrates into dust. To use this power, they commonly chant an incantation. It's also known as Astral Projection.

Along with cursing people, witches can remove curses.

Some witches are able to summon demons.

A common use of magic which causes the person at whom the spell is aimed to die by the witch manipulating the environment around them.

Molecular Dispersion is the power to destroy a target by reducing it to its constituent molecules by giving them massive amounts of energy which forces them to scatter.

Resurrection is the rare ability to either bring oneself or others back to life after being killed or vanquished. While resurrection is a power on its own, the process can also be accomplished through other means, including spells or rituals.

Retrieved from "https://fearlessdivaproductions.fandom.com/wiki/Witches_and_Warlocks?oldid=8293"
Community content is available under CC-BY-SA unless otherwise noted.