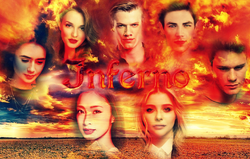 Point Dume Academy is a fictional private academy in Malibu, California that is unknowingly home to various supernatural species. Each student has a secret of their own; some have a past that they don't want to be discovered. In this season, we meet Sophia Dimitrov, a powerful witch (or chrone) and learn about her adventures at the academy as she meets her two roommates (who soon become her best friends): Tara Linn and Arabella “Bella” Martin, and a possible love interest: playboy Josh Frazer. Upon her arrival at Point Dume Academy, she makes an enemy in Sienna Kronin. Does she have what it takes to survive? Maybe, maybe not. Just remember that: at night, even the innocent look guilty.

The idea came about after seeing the success of Queen Alietta's original series had, which was when Selena got the idea to borrow the auditions process from Alietta. This proved a successful format as the blog post where the auditions are has garnered 800+ comments filled with auditions from several users. It has since been advertised throughout many wikias, including Orphan Black, Pretty Little Liars, Stitchers and Bookshub. It has also had the honor of being spotlighted by wikia itself.

Each episode averages (roughly) thirty to thirty-five minutes of music. The soundtrack for each episode is carefully picked so that it reflects on the mood or amplifies the scene the song is being used in. For an easy listen the song (in its respective link) is placed before a scene and then again at the bottom of an episode's page in the Episode Soundtrack section.

Initially starting out as a solo project by Selena , it quickly became more of a team. For the first three episodes of season 1, Sim and Amanda served as creative consultants. However from the 4th episode-present: Erik , Jay and Umayer serve as not only creative consultants but also as writers for the series. Selena has written the first 4 episodes (with creative input from the other writers), but the 5th episode of season 1 was written by: Umayer and the 6th/7th episodes by Jay respectively. The outline for season 1 (with its character arcs and major plot points to hit) has already been done. Season 2 has been roughly planned out as well as the third season. However, neither of these have an official outline written as of yet. Although, Selena does know (roughly) where each major character will be at in each subsequent season and how she plans to end the series.

Inferno includes a number of mysterious fictional elements that have been ascribed to science fiction or supernatural phenomena. It also borrows elements from the likes of Greek, Roman, Native American mythology, etc. Although the series does manage to put its own spit on some of these facets and end up with it's own unique mythology as a result.

Casting Update: The following list of actors/actresses have been cast in the upcoming episodes of season 1 of Inferno:

The first season of Inferno has proven to be quite successful; with each episode page receiving around 100+ reviews in the comments section. Not to mention quite an active fan-base that helps keep the character(and other pages) up to date! The series has already been renewed by Fearless Diva Productions Wikia for a second season after 6 episodes of Inferno have been published. Moreover, the Inferno Universe just got bigger with Bloodlines, the spinoff debuting to quite the success as well on Halloween 2015.

Community content is available under CC-BY-SA unless otherwise noted.
Advertisement