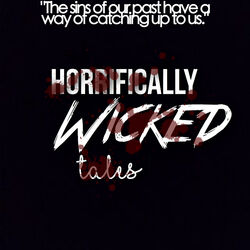 Horrifically Wicked Tales is a slasher anthology series similar to Scream, American Horror Story, and Heathers. It's written by Jay and Selena.

On the night of the Sinners and Saints Masquerade Ball at Windsor Academy, one Queen Bee is killed in a rather mysterious way. Who could have done it? Everyone is a suspect from her best friends, The Bitchettes, to people like Raven Castillo, who was bullied frequently by her. Appearences can be deceiving. On the outside, they're striken by grief over their dead friend.... But deep inside, they are secretly glad she's no longer making their lives miserable. They thought it would end with Callista, but they were wrong. On the one-year anniversary of her death, things take a violent turn for the worse when students begin dropping like flies.

Liv has a big heart. elegant, refined, selfless. Taught from the beginning to not be materialistic or arrogant, yet luxury surrounds her. She has seen countless people struggle to get through the day during her volunteer work, but has never had worries of her own. In a nutshell, she feels compelled to do her duty as a fortunate girl by giving money and food to the less fortunate, but at the end of the day, she gets to go back to her perfect life.

Charming, manipulative, loyal, honest/blunt, very flirtatious, sincere — these are the attributes you'll find in Vevina. Her and Callista are best friends/rivals so at times they fight but care for each other and protective. They are almost always in competition or trying to outdo each other which leads to most of their fights.

Lavender was born in Taiwan to a Taiwanese mother and an English father. When she was born, her mother didn't want to take care of her so her dad took her back to England months later. Lavender is the kind of nerd queen bees fear, she won't let them walk over her like trash but hit them twice as hard. Lav also has a great bullshit detector.

Clara can be easily described as a genius. She is an outgoing person and very sociable, even though she was hurt many times by people she loved. In 2013, her father made them move to France. Almost a year later, he died in strange circumstances. They moved back to London, because Corina thought a fresh start would help Clara and Cyrus get over the loss. Since then, she hasn't let anyone to discover her true feelings and she barely interacts socially. She's also witty and hates people's stupidity. Clara's ambitious and wants to become a surgeon one day.

Community content is available under CC-BY-SA unless otherwise noted.