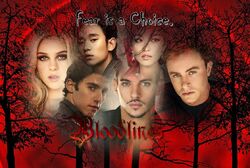 Bloodlines is an Inferno spin-off series. The first season mainly focuses on Vampires and Werewolves and the subsequent threat of the Evergreen Hunter Clan getting stronger and stronger, whereas Inferno focuses more on Witches and Warlocks, as well as a revolving door of big bads. Erik and Stefan serve as executive producers for the series. The 1st season will consist of 10-13 episodes and premiered on Friday, October 30th, 2015. Horrifically Wicked Tales is an anthology series (meaning it reboots at the end of each season) The Devil Within, Handsome Little Liars and Inferno have full season orders(20+ episodes)...this series is more of a limited series. Meaning that each season will focus on a different member of O.R.B.S.

1/3
Community content is available under CC-BY-SA unless otherwise noted.
Advertisement